Church lawyers suggested that witnesses can prepare a testimonial video and it can be presented to the California court without cross-examination. But Judge Alvarez responded that he wants to hear witnesses and follow them as they are cross-examined before making his final decision.

A lawyer of Catholic archbishop, Jose Gomez, argued that this means that the court is “questioning the credibility” of the Catholic Church.  Judge Alvarez insisted on live testimonies.

José H. Gomez is the Archbishop of Los Angeles, the US’s largest Catholic community, and also serves as President of the United States Conference of Catholic Bishops

Judge Alvarez, however, did agree to postpone the live testimonies from the seventh till the 21st   of October. Judge Alvarez said that the court case should not take more than two hours. “I want it clear and simple,” he told lawyers on both sides of the case as they prepare their witness lists.

The jurisdiction issues center on whether a $31 million lawsuit filed in August 2019 against church leaders in the Vatican, the Latin Patriarchate of Jerusalem, and the Catholic church-owned American University of Madaba in Jordan can proceed in a California court.

Seryani’s case is based on claims of multiple breaches of long-term contracts and the failure to reimburse his extensive financial support for the founding of this University when the University lacked funding to even make its own payroll.

Such public testimonies are unprecedented in the history of US judicial relations with the Catholic Church.

Judge Alvarez was provided with “extensive jurisdictional arguments” filed by the parties over the last three years and a massive amount of documentation from Seryani. Judge Alvarez has not yet ruled on the Church’s motion to quash Seryani’s case that was filed back on October 18th, 2019. However, Judge Alvarez did order Church leaders, including the former Patriarch, His Beatitude Fouad Twal, and leaders of the Equestrian Order of the Holy Sepulcher of Jerusalem to be deposed by Seryani’s counsel. 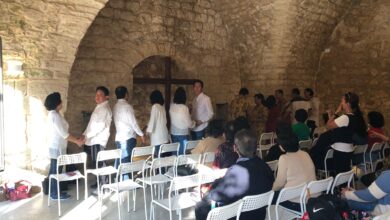