The Synod had elected unanimously Haddad as the head of the synod last Friday during a meeting at the Lutheran Church in Beit Jala. He has been holding that position since July 2020.

The Synod is made up of 38 individuals representing six churches and acts as a legislature for the local Lutheran church. Another woman Hala Tanus was the first elected woman member of the Church Council.

Haddad said he hopes that his role will be to strengthen the role of the church and its members and to provide service to the community.

On the political front, Haddad told Maghtas.com that the path of the church is clear. “the church works on strengthening the Jordanian and Palestinian identity and this includes raising national awareness in our churches, schools, and other institutions.”

Haddad reaffirmed however that the church looks for “coexistence and peace with security, freedom, and justice. We work on these principles in Palestine and in Jordan as well as with our partners from churches around the world.”

As a representative of the bishop in Jordan in the council of heads of churches in Jordan, Haddad called for Christian unity. “The Lutheran Church holds the Lutheran identity but looks to cooperate and engage in the ecumenical movement with the worldwide Christian body.

This is part of my thinking and belief.”

As to the challenges in Jordan, Haddad says that the church has gone through some difficult times but its activities have continued and more will be announced soon for women, youth, and society in general. Also, Haddad revealed that there is an attempt to revive the center at the Baptismal site on the east bank of the Jordan River. “We hope to have community activities, training, and other events there. We had a full-time pastor at the church but due to the Covid pandemic his presence was temporarily stopped and we hope it will not be long before the center is operational”

Reverend Imad Haddad is 42 years old and was born in Beit Jala. He studied theology in Lebanon and continued his studies in South Carolina. He is now preparing for his Doctoral in ministry in the field of Public Theology and pastoral care at the United Lutheran Seminary in the United States. Haddad was installed as the pastor of the Good Shepherd Church in Amman last August 2021. His election and that of the synod will be dedicated to a special event to be announced later. 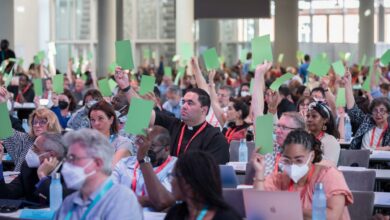